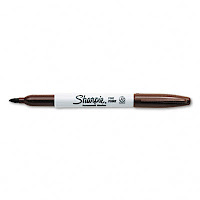 I have an addiction to Sharpie markers and even more so, I occasionally feel compelled to write on my walls with Sharpies. Yes, me. No, not the kids, me, age 33.

It started at our last house, which was a sprucer upper, A.K.A. hideous. I knew it would take several years before we had the time and money to remodel the kitchen. And I was right, it took 7 years until we fixed up the kitchen and then we moved to our current sprucer upper, A.K.A. extra hideous. I guess the logic went something along the lines of...if I have to live with an ugly kitchen with cupboards custom built for a short person, which I am not, and striped berber carpet in it, it might as well be fun. So, I began writing my favorite quotes on the wall in Sharpie. Eventually, whenever we had a dinner party, I invited our guests to add so meting to the kitchen walls too. It became this thing...

Well, it's started again. No, I'll take personal responsibility, I started again. This time it's our master bathroom. Don't let the "master bath" fool you. It's tiny. It has a tiled shower minus the glass door. The glass must have broken during the last owner and now it has small plastic curtain hung by 3 random pink flowered hooks. It also has one oddly placed wall cabinet that the previous owners painted a random exotic bird on and of course... one toilet (that we replaced...good-bye pink toilet), and one tiny and short vanity with a pink sink. Oh, I forgot to mention the florescent light that is all yellowed and flickers for a good minute when you first turn it on. I pretty much feel like I'm getting ready at camp every mooring.

It doesn't bother me that much really because I can see through the ugly to the potential. I know that with some hard work and a bit of cash that someday it's going to feel like a "master bath". In the mean time....I'll write on it in permanent marker.

This time it's not quotes though. This time I write out the current month, calendar style. The logic goes something like this...if I can see how often I work out each month...maybe I'll work out. It works. I started with the month of March and I starred each date that I exercised on. March looks like the 4th of July...I rocked March out!

I also post how much weight I've lost or (grrrr...) gained at the end of each week. It's not really about the weight though. I mean, trust me, I have weight to lose and i'd like to lose it, but I'm focusing more on the exercise piece. The weight loss is a result not the goal.

Then there's April and May....well, I didn't hit rock star status either of those months, but the point is I'm sticking with it. There's an excuse every day to not work out but I'm trying to do the hard thing. I'm trying not to ignore the writing on the wall (pun intended) and although there have been a few starless weeks overall, it's been a great accountability partner for me. I figure I have at least 1 year before we have the time and money to remodel the "master" bathroom. In that time I hope to put up at least 100 stars...and you'll get to count them. I promise, when the time comes, to post before and afters of the bathroom and by that time I also hope that regular exercise will be just another part of my routine...permanent like
Posted by Parenting in blue jeans at 3:03 PM

Ohhhh! I want to come over! I have sharpies in colors of orange, turquoise and pink! I want to have fun too! Seriously, I sometimes think you and I have WAY too much in common! (but its all fun, right? right???)

I feel that way too Sandy! It is all fun and good!